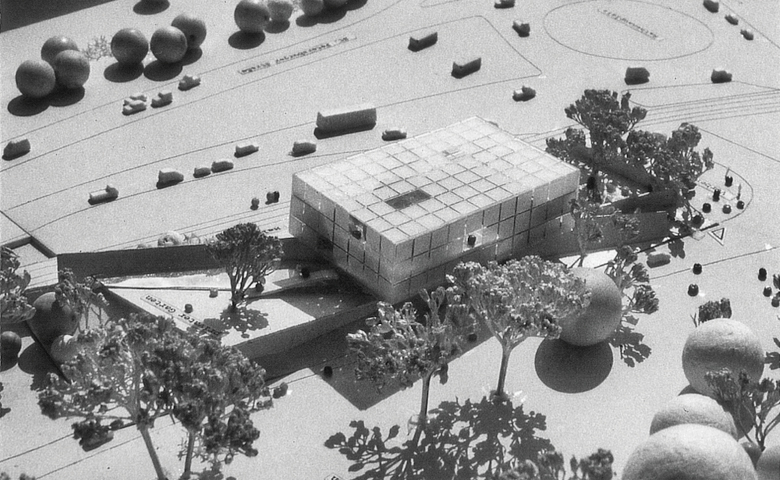 The site for a new Dresden synagogue lies near the center of Dresden’s historic center. The previous synagogue, designed by Gottfried Semper, was destroyed during the Kristallnacht of November, 1938. In addition to the site’s important historical significance, it is also burdened by a difficult urban context which more resembles a traffic island than a location for a place of worship.

Through many model studies, which attempted to make terms with the site, it became apparent that the synagogue could not greatly change the existing urban condition. Instead the design solution, in reaction to a place both historically and physically difficult, ignores the surrounding site conditions and assumes a singular and assertive position.

A pure, rectilinear volume was selected as one which could allow the synagogue to assert itself on the site and also provide recognition for the building in Dresden’s cityscape. We thought a classically modern form in the style of Mies or Wachsmann, one which has not been readily accepted in Dresden for the past 60 years, would offer contrast to other elements of the skyline — the Frauenkirche, the Zwinger and the Bruehlscher Terrace, for example.

The landscape of the site is also treated with a deliberate clarity. A single, diagonal wall cuts across the site to form an upper entrance garden to the city and a lower private garden to the Elbe. The pure shell of the synagogue, which houses the entire functional program, is positioned across the wall at an exaggerated cantilever.

The clear form of the building together with the architecturally formulated gardens define a significant place in the city. From the Elbe River and the city, the building can be experienced by day as a shimmering exterior and by night as a glowing interior.